On Saturday, May 18, 2013, I visited the Willard Cemetery for a second time. This was the day of the annual Willard Tour that benefits a day care center on the old Willard property. Hundreds of people attended the tour and a good crowd gathered at the cemetery. Quite a bit has changed since my first visit on May 14, 2011, when the grass was up to my knees and no one was there but me, my husband, and two of our friends. It was a very sad place. The Willard Cemetery Memorial Project was formed by Colleen Kelly Spellecy in 2011. She has done a fabulous job organizing the group, having a sign installed at the entrance, raising awareness about the project, getting the cemetery lawn mowed, and collecting donations. I was happy to see so many concerned people at the cemetery.

Now there is hope, not only for the Willard Cemetery but for all state hospital and custodial institution cemeteries across the State of New York. A bill was introduced to the NYS Legislature in March 2012 and was re-introduced on January 18, 2013 as S2514-2013. If this bill becomes law, then the names of our forgotten ancestors will be released. They will finally be honored and remembered with dignity. This bill specifically addresses the “burial records” issue. Although HIPAA has stepped out of the way to allow individual states to release “medical records” 50 years after a patient has died, I am not sure if this issue was specifically addressed in this bill. Let’s take one step at a time and be grateful for what is in the works right now! Anyone who has ever dealt with the New York State Office of Mental Health in trying to obtain any type of information on an ancestor, whether it concerns asking where they are buried or obtaining a medical record, knows how arrogant and non-responsive they are unless you have a Ph.D. after your name. This needs to change.

Another fact that people don’t realize is that the great majority, if not all, of these historical cemeteries are “inactive” which means no one else will be buried there. I hope that ALL names are released including more recent burials. For example, when Willard closed in 1995, a gentleman was transferred to another facility. When he died in 2000, he asked to be buried in the Willard Cemetery because this was his home. Who will be here in 2050 to add this man’s name to a headstone or memorial? Who allowed these cemeteries to become forgotten?

Who was sent to Willard? Anyone who was not considered “normal” including the elderly with Dementia and Alzheimer’s Disease. Remember, there really were no nursing homes until the 1950s. Others were Hearing Impaired, had Developmental Disabilities, were Trauma Victims including Victims of Domestic Violence and Rape (back then they called it “Seducer’s Victim”), had PTSD (Soldier’s Heart & Shell Shock), Menopausal Women, Depression, Anxiety Disorders, Brain Injuries, Stroke Victims, Epilepsy, Neurological Disorders, Psychiatric Disorders, and some were locked up because of their sexual orientation, personal beliefs, and religious beliefs. These people, their families, and descendants, have nothing to be ashamed of. That would be like being ashamed of heart disease or diabetes. Putting names on a memorial, headstone, or list, should not be offensive to anyone.

Also attending the tour on this day was Seth Voorhees, Senior Reporter for the Time Warner Cable news channel YNN that serves Rochester and the Finger Lakes. Mr. Voorhees was genuinely interested in my mission to get this law passed in New York and offered me the opportunity of an interview. Although I am not a public speaker, I jumped at the chance to get the word out to a larger audience. I can’t thank him enough for all the time he spent putting this video report together. This piece aired on YNN, Saturday, May 25, 2013. I also need to thank Senator Joseph E. Robach for drafting and introducing the bill to the New York State Legislature. I hope this piece will raise awareness about the anonymous graves issue as this was never about patient confidentiality, it’s about respect.

CLICK HERE TO VIEW THE VIDEO They’re Buried Where? by Seth Voorhees.
Not Forgotten by Colleen Spellecy. 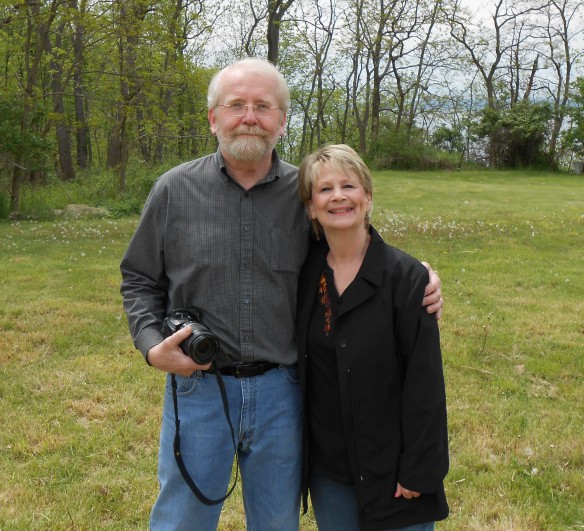 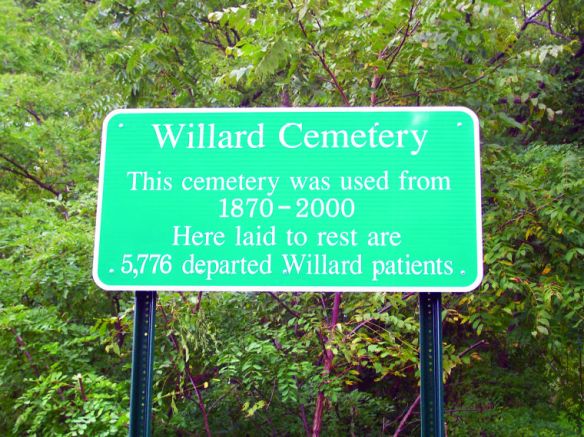 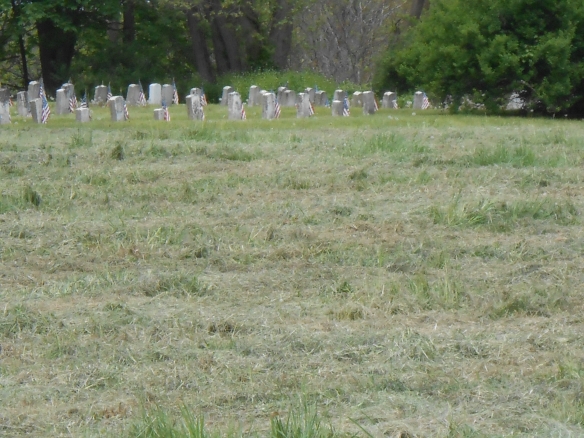 This photo is of the Civil War Veterans Section of the cemetery. They were provided with clearly inscribed headstones from the government. Colleen discovered that a few of them were not “inmates” of Willard but were residents of the town. I wonder how many other United States Veterans who served their country with honor but ended up at Willard are buried here among the 5,776 in anonymous graves?

Leave a Reply to B L Swinney Cancel reply