“Hayt’s Corners, Ovid & Willard Railroad
On September 15, 1882, this railroad was chartered to run from the Hayt’s Corners Station of the Geneva, Ithaca & Sayre Railroad, an affiliate of the Lehigh Valley, to Ovid, seat of Seneca County (2 miles), and Willard, site of the Willard State Hospital (5 miles). The promoters, led by George W. Jones, lacked funds to complete the line, and arranged for it to be leased to the GI&S for 99 years. This was to bring it into the LehighValley system from its opening in May 1883. The line was dual gauge from the outset, laid with 3’-0” rail for conformity with some trackage built on the hospital grounds in 1877-78 to switch coal to hospital facilities from steamboats or barges on Seneca Lake.”
(SOURCE: Hilton, George Woodman, American Narrow Gauge Railroads, Stanford University Press, 1990, page 454).

2 Another View Of The Above

“…An efficient auxiliary in the management of the asylum was the rail-road from Seneca Lake to the Branch, serving also the Main Building and Detached Buildings No. 1 and 3, constructed and brought into regular use in 1878. A steam locomotive and six freight and coal cars are upon the tracks, performing in a very satisfactory manner the work for which the line was constructed, and an actual saving of expense to an establishment so large and extended. With side tracks and turn-outs, it is over two miles in length, and cost including construction and equipment about $19,000. A brick engine-house for use and shelter of the locomotive was erected at the same time.”
(SOURCE: Morrison, Wayne E., Pictorial Album of The Willard Asylum 1869 – 1886, 1978). 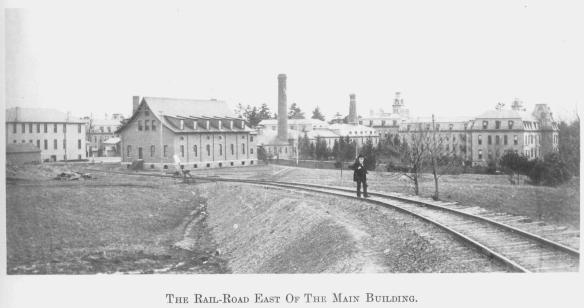 3 The Rail-Road East Of The Main Building

“REPORT OF THE RAILROAD COMMISSIONERS.
HAYTS CORNERS. OVID AND WILLARD. Lessor.
Lessee – LehighValley Railway.
(Date of charter, September 15, 1882.)
The Hayts Corners, Ovid and Willard railroad was organized in 1882, and articles of association filed in the Secretary of State’s office September 15, 1882. The right of way was purchased by subscription; the grading was done by the able-bodied inmates of the Willard Insane Asylum, pursuant to an act, chapter 362, Laws of 1882. The roadbed was then leased to the Geneva, Ithaca and Sayre Railroad Company, said road to iron, fence and operate said road. Said company have conformed to the requirements of the lease and are now operating the road. 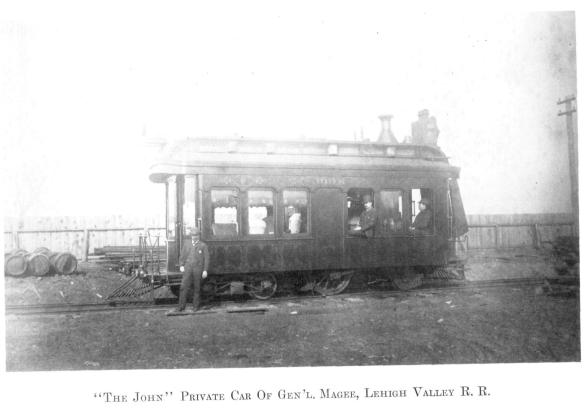 12 At Work On The Embankment