Just to be clear, I have never stated that insane asylums or state hospitals were great places to live; nor have I ever stated that I approve of the incarceration of people who live with a mental illness. I find the subject fascinating and disturbing at the same time, and only wish to share with you the historical views of the nineteenth century, and, on occasion, articles, books, movies, documentaries, photographs, and laws that pertain to the twenty-first century. Thank you for reading!

John Bassett Chapin, M.D., LL.D., was the first Medical Superintendent of The Willard Asylum for the Insane. I finally obtained a photograph of him from the American Antiquarian Society of Worcester, Massachusetts. I also found some articles of interest pertaining to Dr. Chapin from The New York Times. 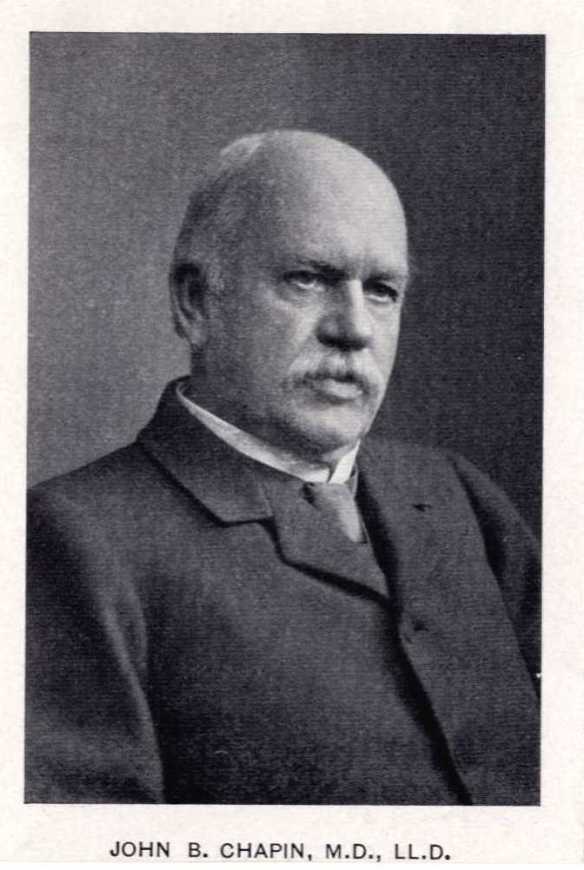 THE DUTY OF THE STATES TOWARD THEIR INSANE POOR –
VIEWS OF DR. JOHN B. CHAPIN.

Underlying the initial legislation pertaining to the insane is the apprehension of danger to person and property which may arise from their irresponsible condition. If it is conceded that the safety of the community requires the personal liberty of the insane should be restrained, it follows that an obligation rests upon the State to direct, in its sovereign capacity, that the restraint should be properly and humanely exercised, and the custodial care combined with such remedial measures as will afford the greatest probability of recovery, which the individual in his condition cannot direct intelligently for his advantage. The state of helplessness and dependence which insanity at once produces, excites commiseration and pity, and prompts to sympathetic impulses, which move a community to give them expression in legislative acts for the relief of persons thus unfortunately afflicted. It may be a question whether the exercise of legislative functions to accomplish humanitarian purposes comes strictly within the objects of a Government, when these legislative acts require for their full execution the collection of taxes for objects which it is not alleged will add to the prosperity financially of the State, or enhance appreciably the value of the property of its citizens. Illustrating this view, it may be observed in this connection that taxes for purposes purely benevolent in their character are among the last to be levied and paid with reluctance, while those provided for internal improvements are more freely, and, sometimes, even liberally, voted.

Our whole duty to the insane, as well as to all the dependent classes, may not appear from the nature and objects of human Governments, but it does appear when we consider and accept those higher principles which it was the province of the Divine Master and Teacher to inculcate, the practical application of which distinguishes Christian from pagan civilization.

If, then, the safety of society imposes a necessity of exercising a salutary control over the personal liberty of the insane, then those reciprocal obligations which exist and bind together the members of a community also require that the State should make special provision for the medical treatment and supervision of its insane poor, whose helplessness, dependent condition, and hope of recovery append to our sympathy and higher sense of duty, without which aid they must inevitably seek that last refuge – the refuge which the jail and almshouse afford.

The existing institutions for the care of the insane, whether corporate or erected under State auspices, may be regarded as a recognition of these obligations. If we examine the history of the early efforts to establish each one of these institutions, we will find they had their origin in the hope of improving the condition of the insane poor; that these efforts have been materially aided by “memorials,” petitions,” and official reports, representing the neglected condition of the insane in jails and almshouses, and that the favorable action of Legislatures has seemed to be the direct result of these representations.

In view of the many official recognitions of the claims of the insane poor, what becomes the duty of the States to this class?

Recognizing the fact that the sentiment of a community conforms itself to its written statutes, it is of the first importance that the State, in its sovereign capacity, should clearly define the legal status of an insane dependent in accordance with the principles we have stated. It should not be discretionary with a public officer, before whom a case is presented for action, to send an insane person to an asylum, or to an almshouse and jail. With such formalities as may be deemed requisite, there should be no discretion in the case, but the public officer should in unmistakable language be required by the statute to order the transfer of the insane dependent to a public asylum established and managed upon accepted and approved principles. The insane poor should be removed as far as possible while there, in all that pertains to their daily surroundings and maintenance, from the various baneful influences of political changes, and the mercenary economy which sometimes afflicts localities.

The State institutions should be held strictly to their originally-designed purpose, so that the class for which they were, and are, intended, should have the fullest benefit of the establishment, and not be excluded by any policy of internal administration.

In the earlier history of this subject it was usual to officially designate institutions for the insane as asylums, which conveyed to the popular sense the idea of permanent residence during a state of disability. Latterly it has been the practice of our Legislatures to create establishments for the insane under the name and style of hospitals, which would seem to serve the purpose of a medical idea. No exception ought to be taken to a name did it not come to subserve in practice the purpose of the idea that such institutions were places of temporary abode for patients who were ultimately to find an asylum or refuge elsewhere, when pronounced incurable. Having a firm conviction that this practice has depreciated the value and importance of asylums, we believe the State establishments should be called, and actually become to the insane, asylums or homes, and the practice of discharging and removing incurables to the almshouses be abandoned.

While great additions have been made to our knowledge of the nature of insanity, its proper medical and moral management, we must ask ourselves the question whether the present state of medical science will warrant us in believing the percentage of recoveries will increase. We must regard actual results, and not take counsel of our medical enthusiasm and hopes, and confess that official reports do not justify the belief that this percentage is increasing. This statement should not be made without acknowledging the fidelity and earnestness with which so many members of the profession are laboring in this department of medical research.

Would that we could realize the results that have been hoped for! Much as we love our profession and its noble offices, it is of more importance that the people of the several States be impressed with the results which actual experience develops, and prepared to discharge their whole duty to the large class of incurable insane persons who will remain a life-long public charge, as well as to the recent and curable cases.

To recognize the fact, as we must, that a small portions of the insane poor are well cared for in the existing State asylums, while the mass are provided for in the almshouses, is a sad commentary upon the existing system. To propose that we must erect more hospitals, when we are yearly struggling for appropriations to complete those we have commenced, or to keep those we have erected in a proper state of repair, does not solve the problem, but postpones it.

What our duty may be to the insane poor may be easy to determine for ourselves. If we would witness some results of a scheme of relief it must be adapted to the appreciation of the popular mind, to the pecuniary ability of tax-payers, and have the merit of comprehensiveness.

In reference to the disposition of recent cases with whom the hope of restoration mainly lies, no question can occur. There should be ample asylum accommodation prepared for their prompt treatment. The only question that we think can possibly arise is the proper disposition of the chronic and incurable cases. As we have before stated, it is our opinion that the discharge of incurables from the asylums should cease. We believe it is entirely feasible to attaché to all the asylums supplemental departments in which the tranquil and manageable cases can be made more comfortable than under an almshouse organization and on plans acceptable to tax-payers.

We believe great concessions may be made in the plans, style of architecture, and cost of construction of asylums, so that additional structures will be entered upon with less reluctance. It is not necessary that these structures should be built to endure for ages. It is quite possible and probable that the changes of a single generation may cause a departure from present plans to be highly desirable.

A word is necessary on the subject of the maintenance of the insane, and here, again, we are confronted with the financial aspect of the question. In those States where the expense of maintenance of the insane poor is a direct charge upon the counties or towns, there is a manifest reluctance, except in extreme cases, to transfer them to the State asylums, where the views as to their requirements differ, and the expense is greater than in the county poor-houses. We do not believe the differences which prevail on this point can be reconciled except by positive legislation.

In conclusion, we deem it of the highest importance that entire harmony should exist and be cultivated between the Boards of Public Charities of the several States and the medical profession as to the best policy to be pursued.

On motion, Mr. Sanborn, of Massachusetts; Mr. Giles, of Wisconsin, and Mr. Letchworth, of New-York, were appointed a committee to report a plan for unanimity of action as regards the treatment of the insane.”
SOURCE: Reprinted from The New York Times. Published: May 21, 1874, Copyright @ The New York Times.

“PHILADELPHIA, May 27. – The members of the association of Medical Superintendents of American Institutions for the Insane reconvened this morning, in the third day’s session, with Clement A. Walker, Superintendent of the Insane Hospital of Boston, presiding. Previous to the convention being called to order, the Chairman presented to the members of the association Miss Dix, of Trenton, a lady well and favorably known for her extensive philanthropic disposition, having been instrumental in the establishment of a large number of institutions for the insane in America and Europe. Invitations to visit several public institutions were received. Dr. John B. Chapin, of Willard, N.Y., read a paper on “Experts and Expert Testimony in Cases of Insanity,” and the subject was discussed by Dr. Kempster, or Northern Wisconsin; MacDonald, of New-York City, and other members of the association. Dr. R. Gundry, Superintendent of the Maryland Hospital at Catonsville, Md., read a paper on “The Insanity of Critical or Transitional Periods of Life.” In the afternoon the members visited Girard College.”
SOURCE: Reprinted from The New York Times. Published: May 28, 1880, Copyright @ The New York Times.