These two documents from the Proceedings of the Board of Supervisors of the County of Monroe, shed a great deal of light on the forgotten cemetery that was uncovered by excavation in Highland Park, Rochester, New York. In July 1984, approximately 900 human remains were discovered; 284 to 305 of these remains were removed, examined, and reinterred in Mt. Hope Cemetery in 1985. Hundreds of remains, many buried on top of another, were left at the sight undisturbed because it was thought that they were buried deep enough. What is most interesting to me is the County Board of Supervisors of 1872 clearly knew that this fenced-in, unmarked cemetery, known as the “bone yard” existed, and was still being used as late as January 8, 1873. It was on that date that the supervisors made a decision to discontinue burying the inmates of the Penitentiary, Alms House, and Insane Asylum in the cemetery that was located behind the Penitentiary. “Resolved, That the Superintendents of the penitentiary, and of the county poor, be and is hereby directed in the future to discontinue the burial of paupers or criminals in the old burying ground attached to the penitentiary, and to have the remains of all such interred in Mount Hope cemetery.” It would appear that although they knew it existed, it was not recorded on any map, or perhaps the map has never been found. Through the passage of time, the cemetery was forgotten. The Remember Garden marks the location where many of the bodies were found and was dedicated in 2009. “Since 2004, the effort to create a living memorial garden, located at the original site in the park, has been coordinated by DePaul Community Services. DePaul Community Services coordinated development, building, planting and maintenance of the garden. The Remember Garden appropriately marks the grave, lending dignity and respect to those buried there, while heightening community awareness to the site and the history of institutionalization. The plantings are predominantly purple, reflecting the official color of Mental Health Awareness. Pinks and blues are also part of the scheme that includes trees, shrubs, perennials, and annuals.”

Even though I know that I will never be credited with making this discovery, I am very proud that I uncovered the “Bone Yard.”

“Saturday, December 14, 1872. Board met pursuant to adjournment. Mr. Jeffords in the Chair. Members all present. Minutes of the meeting of the 12th inst. read and approved. Mr. Malone, presented the following report, which was adopted, and on his motion the Clerk was instructed to have the survey recorded in the County Clerk’s office.

To the Board of Supervisors of Monroe County:
Gentlemen:—In compliance with a resolution of your honorable body at the close of the November session, commanding the Chairman of the Building Committee of the new Poor House to cause a survey of the lands occupied by the new Alms House and fix the amount that should be set off for the use of all the County Institutions, I therefore present the following survey of the lands, with the amount to be occupied by the different institutions of that part of the grounds owned by the County lying between the Poor House road and the Cobb’s Hill road, east of South avenue: 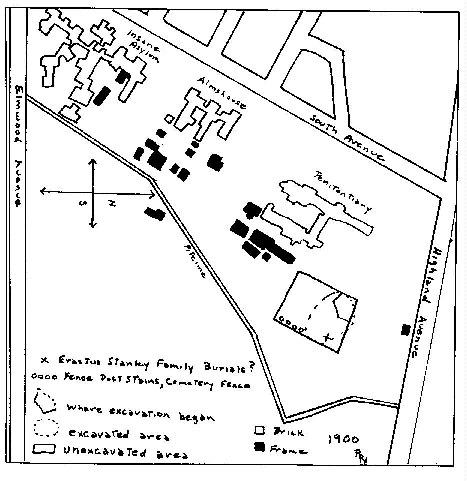 (The above map was most likely made at the time of the excavation by the Rochester Museum and Science Center team).

Resolved. That the survey herewith presented be fixed as the division of the county lands described above, and that the Penitentiary occupy the residue of the land not contained in the said survey of that portion of the County farm described above.

Resolved. That the Poor House authorities have the right of a driveway across the asylum lands, from the new Poor House to the old Poor House road. Respectfully submitted, P. Malone.” (Pages 188-189) 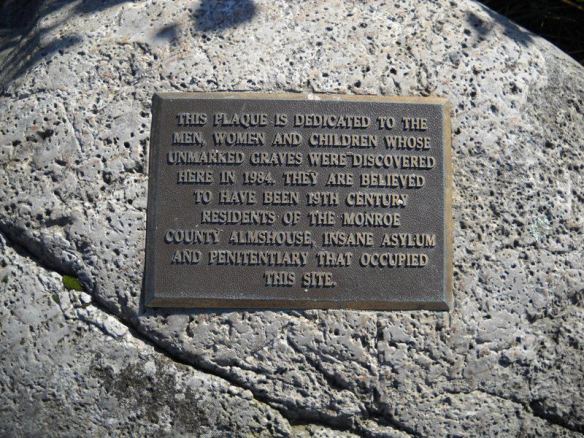 “January 8, 1873
Mr. Malone presented the following report, which was accepted:

CHAPLAIN’S REPORT.
Rochester, Dec. 31, 1872. To the Honorable the Board of Supervisors of Monroe County:
Gentlemen:—The duties of the office of Chaplain of the Monroe county almshouse, to which you did the subscriber the honor to reappoint him in 1871, have been discharged by him during the past year in conducting public worship on Sundays and preaching in the chapel, in visiting and ministering to the inmates both on Sundays and week-days, in the house and in the hospital, in administering in public and in private to such as sought them at his hands, the Christian sacraments, and in services in the chapel and at the grave over the remains of the dead. When the chilly weather of autumn set in, after the pulling down of the large dormitory for men, it became necessary to occupy the chapel as a dormitory, and the public religious exercises in the chapel were suspended; but the visits of the chaplain and his ministries to individuals were continued until he was informed, some time in October by a friend, of the action of your board in making a new appointment. After that his visits were confined to members of his own communion who asked his services.

In consequence, as he has been informed, of an increased charge (eight dollars) for interments of paupers not chargeable to the city, in the public grounds of Mt. Hope, the bodies of those of this class who were friendless, were laid in, what is familiarly known as the “bone yard,” an enclosed lot of the public farm in the rear of the penitentiary. It was not uncommon, in such cases, to make more than one attempt in opening a grave, from the pick and shovels encountering, perhaps transversely, the mouldering coffin of some buried convict or pauper; while in spring and autumn, on a rainy time, the wetness of the ground and water in the grave, added to the pain of dishonoring the ashes of a brother man. 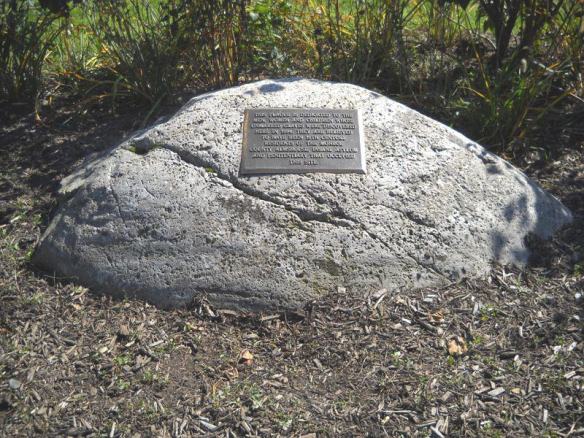 In several instances your chaplain could not deny himself the privilege of procuring at his own expense the interments in Mt. Hope of patients dying in the hospital, whose dependence came of misfortunes and not of crime, and whose sickness and death had been cheered by the solace of Christian baptism and communion. He has ventured to attach to his report a receipt for his outlay in one of these cases, in the confidence that a rich agricultural town will not fail to reimburse him. 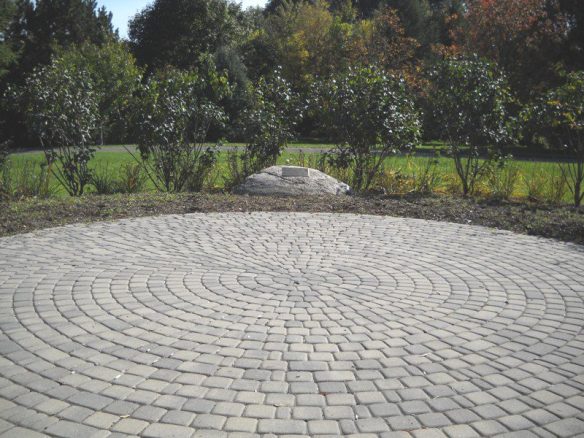 RELIGIOUS SERVICES FOR ROMAN CATHOLICS.
It is well known that a very large proportion of the inmates of your almshouse are foreign born, and that most of these are in religious faith Roman Catholics. It is a part of their education to make much of attendance once on each Lord’s day on the public worship of their church, and it had been customary to indulge many of them in going to the city on Sunday mornings for this purpose. The result from their yielding to the solicitations of appetite or the false kindness of acquaintances, were subversive of the order and discipline of the house, and an effectual remedy was found in the rule laid down and enforced by the present officers forbidding absence on Sundays, in conjunction with an offer of the chapel, at a fixed hour on Sunday, for religious services by a minister of their own faith. Such services were held in consequence in the chapel at an early hour on Sunday mornings, by Father Bupaffe, a Roman Catholic clergyman, of courteous manners and earnest devotion to his work, under appointment from his bishop, beginning in March last, and suspended upon the taking of the chapel for a domitory. The influence of this arrangement upon the discipline and good order of the house has often been attested by the officers in charge.

Your chaplain may be permitted to say in conclusion, that the ties of his sacred calling with inmates of the house who welcomed his services and with some who are still tenants of your hospital and examples of every Christian virtue, and the happy relations and intercourse experienced with all the officers of the institution, having been chief recompenses of his services there. 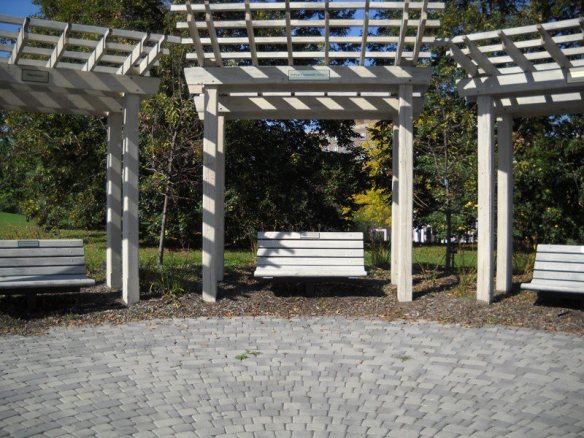 Mr. McNaughton moved that the claim of Dr. Van Ingen referred to in his report, amounting to eight dollars, be referred to the chairman of the Alms-House Committee to report thereon. Carried.

Mr. Mack moved that when this board adjourns for the day, it be until Friday morning next at 10 o’clock. Carried.

Upon motion of Mr. Pool, the Messenger was instructed to have the sleighs in readiness at 12 o’clock to-morrow, to convey the members to the alms house.

By Mr. Larkin-
Resolved, That the Superintendents of the penitentiary, and of the county poor, be and is hereby directed in the future to discontinue the burial of paupers or criminals in the old burying ground attached to the penitentiary, and to have the remains of all such interred in Mount Hope cemetery. Laid on the table by consent.” (Pages 211-212)

Proceedings of the Board of Supervisors of the County of Monroe, for 1872, Rochester, N.Y., Steam Press of Curtis, Morey & Co., Union And Advertiser Office, 1872.