THE INFLICTION OF THE DEATH PENALTY BY MEANS OF ELECTRICITY
by Carlos F. MacDonald, M.D.,
President of the New York State Commission in Lunacy. 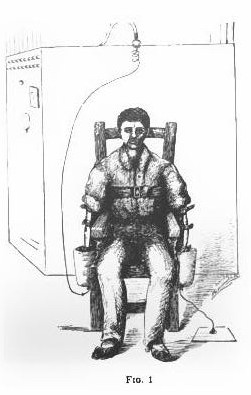 “The widespread interest manifested by the general public in the new method of inflicting the death penalty by means of electricity, and the interest which medical science would naturally be expected to feel in the humane and scientific aspects of the subject, especially with reference to the absence of conscious suffering, and the changes, if any, in the tissues and organs of the human body resulting from the passage through it of electrical currents of lethal energy, together with the fact that this method of executing criminals may now be said to have practically passed beyond the experimental stage, would seem to justify, if not indeed to demand, the presentation of an authentic summary of the practical results thus far obtained by some one whose data and conclusions would be derived from actual observation and experience in the application of the statute. The fact that the writer happens to be the only physician who has participated in all of the official preliminary experimental tests of apparatus, and witnessed all of the executions thus far had under the new law-not, however, from any zealous interest in the subject, nor even inclination to be present, but in obedience to the expressed desire of the chief executive of the State and other official superiors-furnishes the only excuse he would offer for undertaking what otherwise might well be regarded as an undesirable task.

In view of the wide publication of distorted and sensational accounts of the Kemmler execution, and the amount of adverse criticism and even condemnation based thereon of those who were called to act in an advisory capacity in the administration of the law, the writer, at the request of the Governor, prepared an official report of that event, some portions of which are necessarily here reproduced.

The execution of William Kemmler, alias John Hart, at Auburn prison, on August 6, 1890, pursuant to the statute in such case made and provided, marked the first case in the world’s history of the infliction of the death penalty by electricity. Since then six other condemned murderers have been legally killed by this method at Sing Sing prison-namely James J. Slocum, Harris A. Smiler, Joseph Wood and Schichiok Jugigo, on July 7, 1891; Martin D. Loppy, on December 7, 1891, and Charles McElvaine, on February 8, 1892, making in all seven cases of successful infliction of the death penalty by electricity in the State of New York.”

“In all the cases except Kemmler’s and McElwaine’s contact was broken for the purpose of wetting the electrodes. From the foregoing it appears that the time consumed in the preliminary preparations — strapping, adjusting electrodes, etc.— varied from four minutes in the first to less than a minute and a half in the last instance; that the number of contacts varied from two to four, and that the aggregate length of the contacts in each case varied from forty-five to eighty-seven seconds, at the end of which, if not before, in most instances, both conscious and organic life were absolutely extinct.