For the past few years I have tried to get the attention of state and federal lawmakers to pass a law in New York State that would provide for the release of patient names; dates of birth and death; and location of graves, of people who were committed to State Hospitals and Custodial Institutions during the nineteenth and early twentieth centuries who were buried in unmarked or numbered, anonymous graves, whether they be in formerly state, county, or city owned cemeteries. (See My Story) I also asked for a searchable, digital database, available to the public to be included in the bill. On August 22, 2011, I finally got the opportunity to meet with Kate Munzinger, Senator Joseph Robach’s Chief of Staff. Ms. Munzinger took the time to listen to what I was asking for. 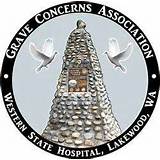 The reason why I’m blogging about this issue again is because the bill in New York State has not yet become a law. There are caring people in several states who are pushing to get a similar law passed but state and federal representatives will not give them the time of day or they won’t even consider passing such a law because of the misinterpretation of the federal HIPAA Law. I want to help those people in other states by sharing with them what was shared with me. If not for Laurel Lemke, Chair of Grave Concerns Association, I don’t think I would have received the attention of Senator Robach. In 2004, Ms. Lemke and others, had fought for this cause, and managed to amend law 6678 in the State of Washington that allowed for the release of patient names for the purpose of memorialization. She emailed me the bill which I in turn gave to Kate Munzinger, Chief of Staff; Tim Ragazzo, Director of Operations & Legislation; and Senator Joseph Robach. A bill was drafted and introduced to the New York State Legislature in March 2012. The title of the bill is: “An act to amend the mental hygiene law, in relation to patients interred at state mental health hospital cemeteries.”

Western State Hospital, Pierce County, Washington, has 3,218 patients who are no longer anonymous. Grave Concerns Association has raised funds and replaced 1,200 names since 2004. The forgotten have been remembered with dignity. With community fund raising efforts and countless volunteers, inscribed headstones that identify the patient’s name, date of birth and death, have been placed at the graves; and a searchable, digital database has been uploaded to the internet. In contrast, New York State, with 22 or more former state custodial institutions combined has upwards of 11,000 or more people buried in anonymous graves who through no fault of their own have been erased from history. Willard State Hospital alone has close to 6,000 patients buried in anonymous graves.

Sherry Storms, Stacie Larson and Laurel Lemke, Grave Concerns Association, John Lucas, countless volunteers, and the State of Washington deserve to be recognized for their ground breaking, painstaking work, and above all, their model should be copied in every state in the union. The New York State bill is important and necessary in order to restore the dignity and personhood of the thousands of people who were incarcerated and died at former New York State Insane Asylums (later renamed State Hospitals), and State Custodial Institutions (for Feeble-Minded and Epileptic persons). When the bodies of the inmates were not claimed by family members, they were buried in anonymous, unmarked graves. Many of these unclaimed bodies went to medical colleges and pathology labs for the furtherance of medical science. These people deserve to be remembered, and we need to remember what happened to them so that we do not repeat the mistakes of our ancestors.

It is my hope that the State of New York, and all states, will pass similar legislation and follow the Washington State – Grave Concerns Model. They have done a great service for the community and the nation by naming the forgotten; setting up an exemplary, searchable, digital database; and trying their best to remove the stigma of mental illness.

I include here my story about trying to obtain my great-grandmother’s medical records and photographs from the Willard State Hospital, along with asking for the release to the public of former patient names; dates of birth and death; and location of graves, in order that these forgotten people, of which there are thousands, may be honored and remembered with dignity. It all began on February 24, 2001, when I found my great-grandmother’s obituary: According to the “PennYan Democrat” newspaper dated August 17, 1928: “PUTNAM, At the State Hospital in Willard, Monday, August 13, 1928, Mrs. Margaret Putnam, aged 76 years. She is survived by one son, Jarvis Putnam, of PennYan. The funeral was held from the Thayer Funeral Home Wednesday afternoon, Rev. W.A. Hendricks officiating. Burial in Lake View cemetery.”

It took a long time for me to figure out where I should be looking in order to obtain information about my great-grandmother. In 2001, I was unable to find anything on the internet pertaining to this issue which is the main reason I created this blog (July 10, 2011) and wrote the book The Inmates of Willard 1870 to 1900, A Genealogy Resource (December 17, 2011). In 2007, I came across an article about a new book written by Darby Penney, MLS, and Peter Stastney, M.D., entitled The Lives They Left Behind Suitcases From A State Hospital Attic. Wondering if my great-grandmother’s suitcase was among the 400 discovered in an attic of the Willard State Hospital, I contacted Ms. Penney. Unfortunately, it was not among the surviving suitcases. Ms. Penney’s book revealed the practice of burying “mental patients” in anonymous graves. I must admit that I had never heard of this practice before and thought it was extremely cruel. What amazed me most was that no one (that I knew of) had ever tried to rectify this sad, dehumanizing situation. What needs to be acknowledged is none of these well documented facts about the thousands of people buried in anonymous graves at Willard, and all former NYS Hospitals and Custodial Institutions, would ever have come to light without the tireless efforts of Ms. Penney, Dr. Stastney, and Mr. Craig Williams, Curator of History at the New York State Museum at Albany. I also need to thank Laurel Lemke, from the Grave Concerns Association, for sending me the law that she helped to pass in the State of Washington in 2004. Without her help in emailing me the bill, I never would have gotten the attention of Kate Munzinger, Senator Joseph Robach’s Chief of Staff. I met with Ms. Munzinger on August 22, 2011. Senator Robach introduced the bill to the New York State Senate in March 2012.

The following response letters, beginning in early 2008, are from everyone that I have contacted over the years. I have not included emails. Unless a modification is made to the present HIPAA Law and New York State Mental Hygiene Laws (See New HIPAA Update and S2514-2013), I and so many others like me, who want to know why our ancestor was committed to a state hospital, will never know the answer. My first response letter is dated April 16, 2008, in response to the original paperwork that my physician and I had sent in early September of 2007 (seven month wait). On August 13, 2008, I was denied a copy of my great-grandmother’s medical records and photographs from the Greater Binghamton Health Center. This three sentence response letter is the explanation given to me after waiting four months, taking the time and effort to speak with them on the phone, obtaining and filling out their required paper work with the help of my physician, and sending in the forms. 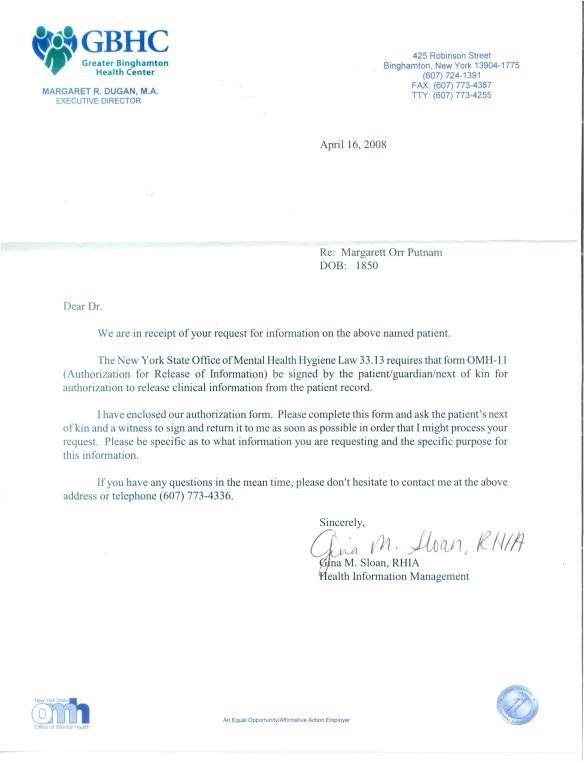 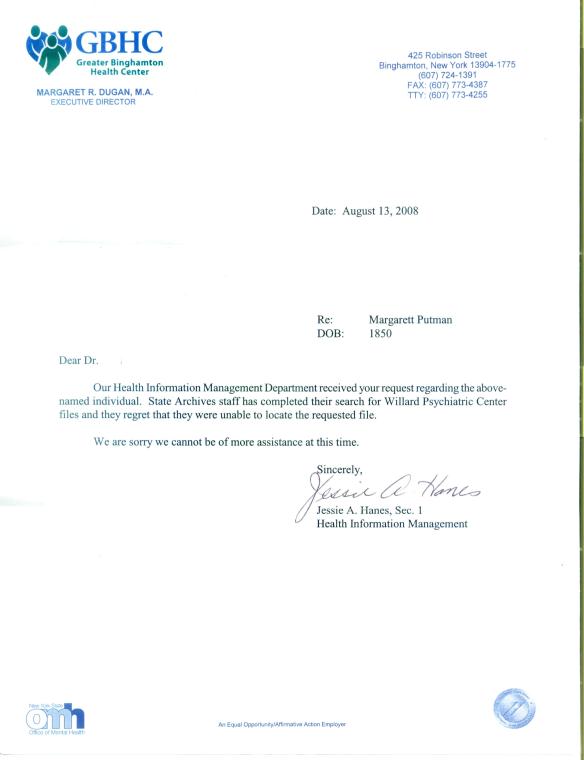 Besides writing a letter to former New York State Governor Patterson and present Governor Cuomo, both U.S. Senators from New York: Schumer and Gillibrand, State Senators, Congressmen, The Department of Correctional Services, The Commission on Quality of Care and Advocacy for Persons with Disabilities, The Office of Mental Health Counsel, and the State of New York Department of State Committee on Open Government (FOIL), I also wrote a letter to the doctor in charge of the Office of Mental Health Institutional Review Board asking permission to view, record, and publish the burial ledgers – names; dates of birth and death; and location of graves) located and stored at the NYS Archives. After waiting seven months for a response, I was told in an official letter, that my proposed study was not approved due to concerns about violating patient confidentiality. I was also told that I could take the New York State Office of Mental Health to court in order to get the names of former patients and the medical records of my great-grandmother, but seriously, who has the time and the money to go through all of that? Privacy ends at death but apparently patient confidentiality lasts forever.

I went through proper channels to obtain Maggie’s medical records and photographs. I filled out the paperwork, had my doctor and a witness sign the paperwork, and my doctor sent it in. I waited four months for a response and finally my doctor received a letter. I asked for the medical records and any photographs of my great-grandmother. When I received the response from the Greater Binghamton Health Center in August 2008, it stated the staff was unable to locate the requested file. Had I received my great-grandmother’s medical records, I would have been satisfied. Besides being genuinely interested in learning more about Willard, I created this blog for family genealogists like me, frustrated trying to find out if and when their ancestor was a Willard inmate, receiving the runaround obtaining their ancestor’s medical records and photos, and determining whether their ancestor is buried in the Willard Cemetery. The final answer came from the Commissioner of the NYS Office of Mental Health in responding to my inquiry by e-mail on October 25, 2010, which basically stated that publicly identifying former patients may be offensive to some families because of the stigma and repercussions that may follow, for example, in some small towns. I must say that I took offense to his statement because I live in a small town. What exactly was he trying to imply? It appears that we have not moved any further in our tolerance or understanding of people with problems and of people who live in small towns. I must say that my favorite letter is from the Commissioner, dated June 3, 2011, in which he reminds me “that the penalties for violations are very stiff – civil penalties under federal law can carry up to $10,000 per violation.”

Willard’s inmates who in life were incarcerated, forgotten, warehoused, and controlled by the state are once again controlled and intentionally forgotten in death by New York State, the New York State Office of Mental Health, or both. Perhaps they are interpreting the scope of the HIPAA Law incorrectly. The only logical assumption is the protection provided by these laws is not for long dead souls since U.S. Federal Censuses already reveal many of their names; it is for the protection of the descendants.

The responses from the Senators are interesting because they state that there is nothing they can do about the situation at Willard. They mention nothing about modifying the HIPAA Law which was one of the questions that I asked them to respond to. My understanding is that they are the only ones who can change or modify this federal law in order that descendants or anyone for that matter, would be allowed to have a copy of these historical medical records. When you’re dead, you’re dead. Who cares if someone looks at 80 year old medical records? The following letters were received by me from Senator Charles E. Schumer, dated January 9, 2012; and from Senator Kirsten E. Gillibrand, dated February 21, 2012. Perhaps this whole ridiculous situation of trying to uncover the identities and opening medical records of people who have been dead for one hundred years lies with the unique interpretation of the federal HIPAA Law by each individual state office of mental health. 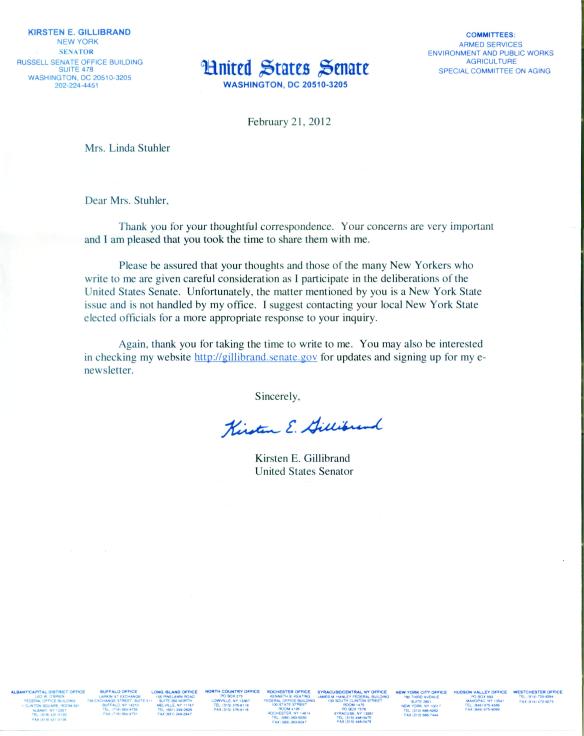 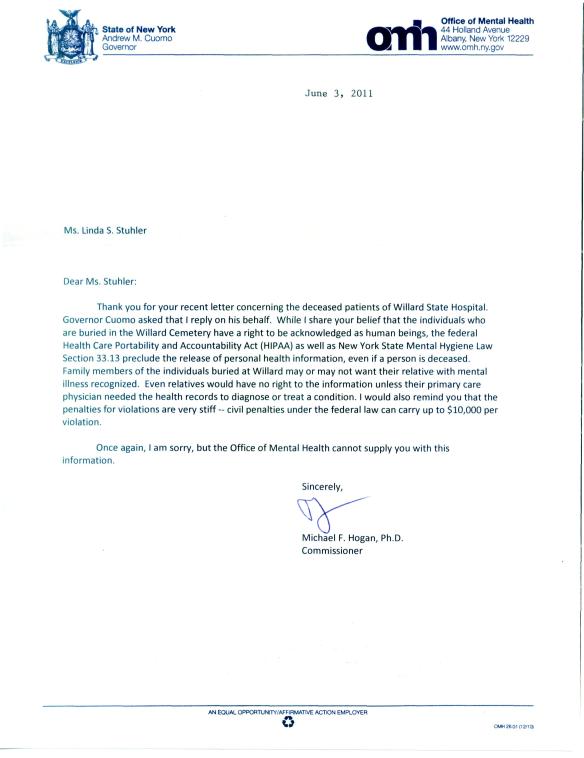 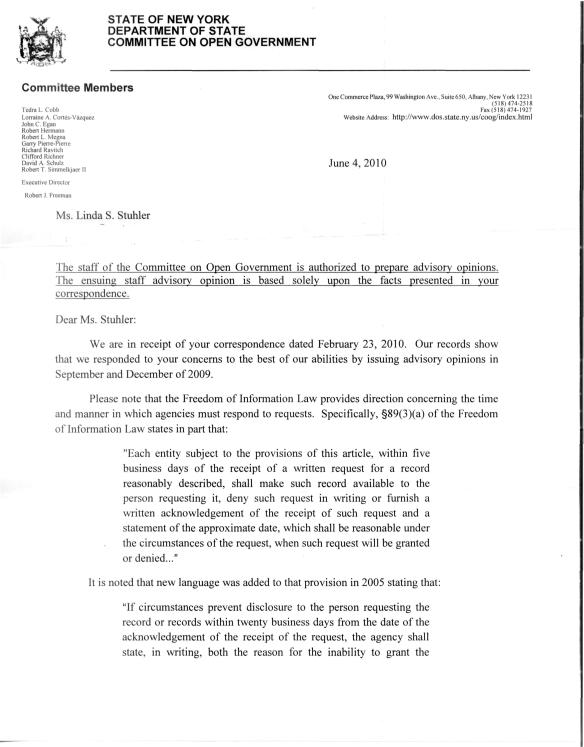 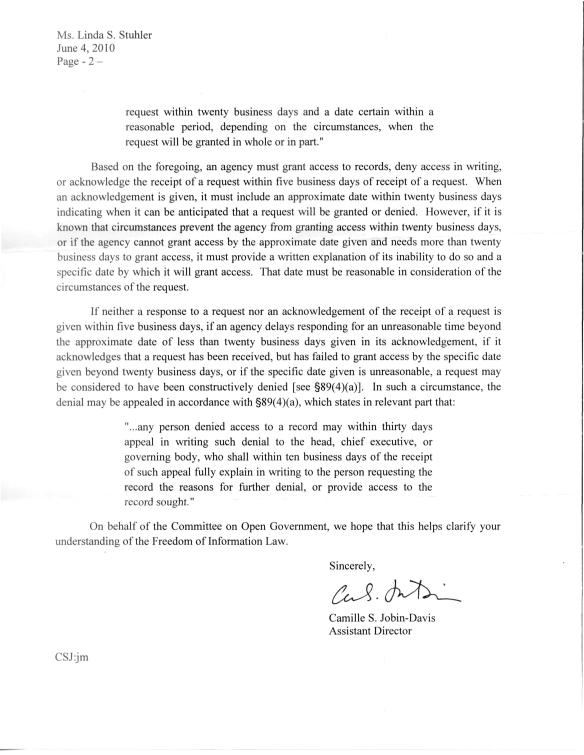 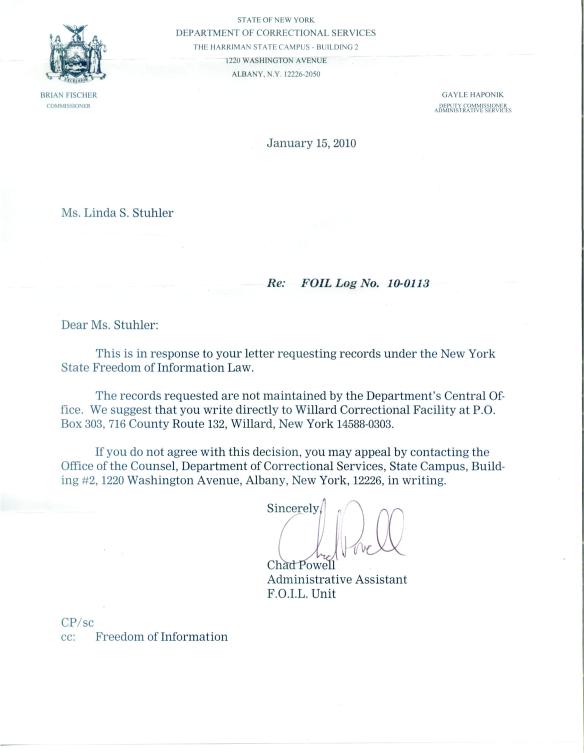 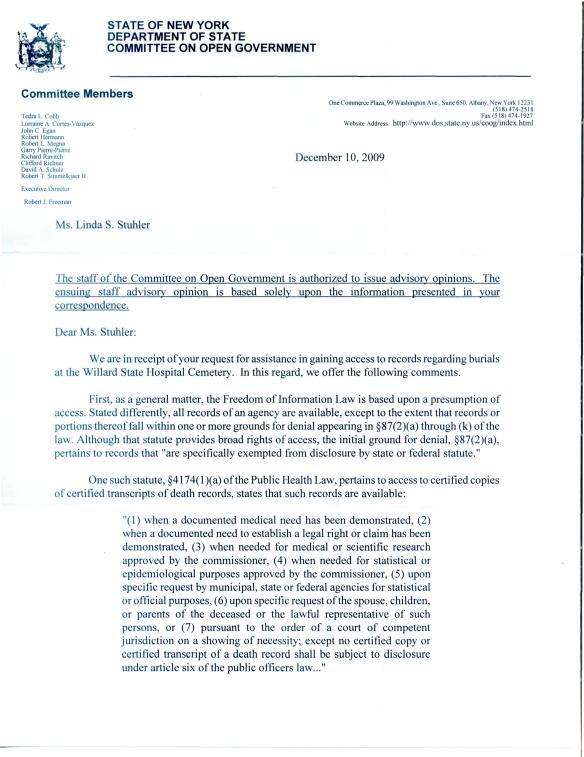 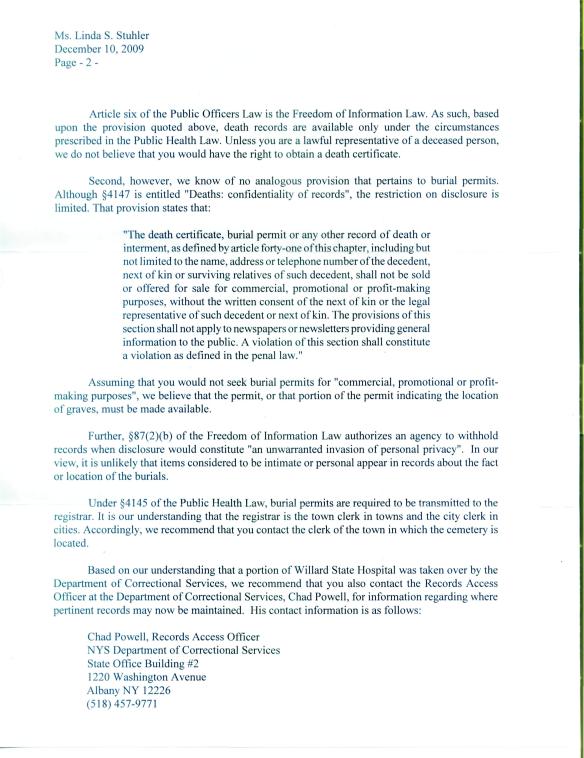 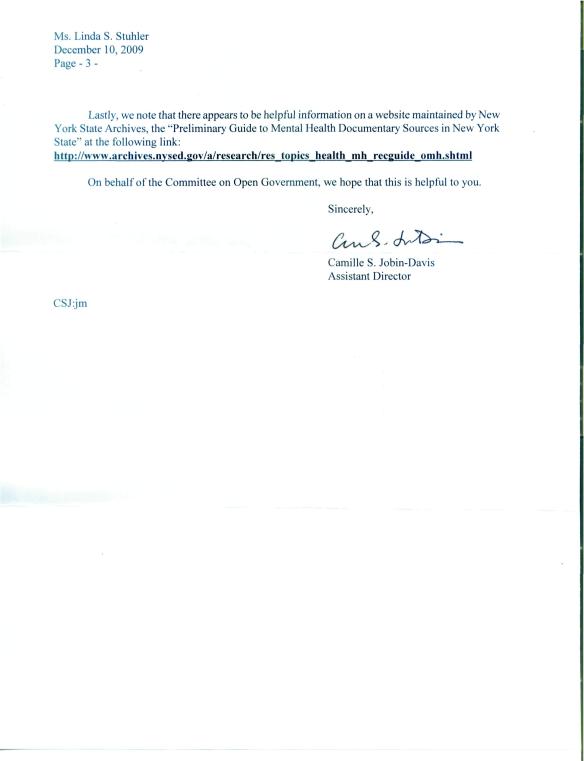 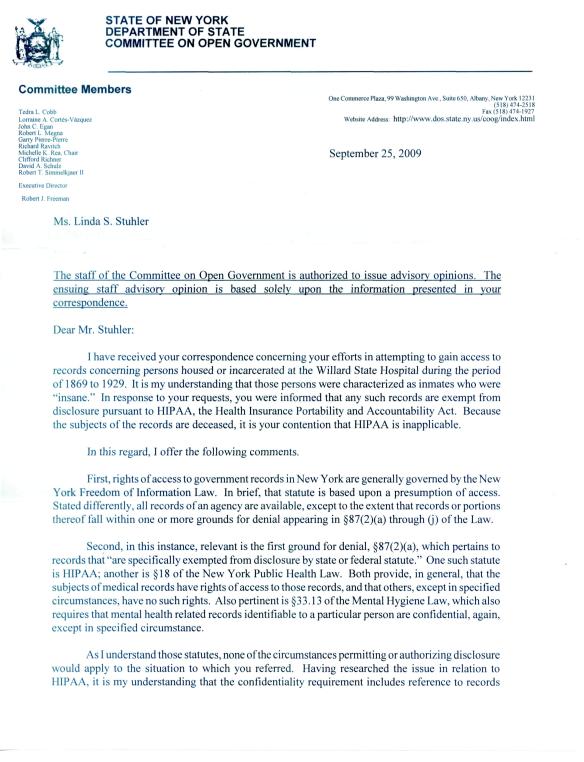 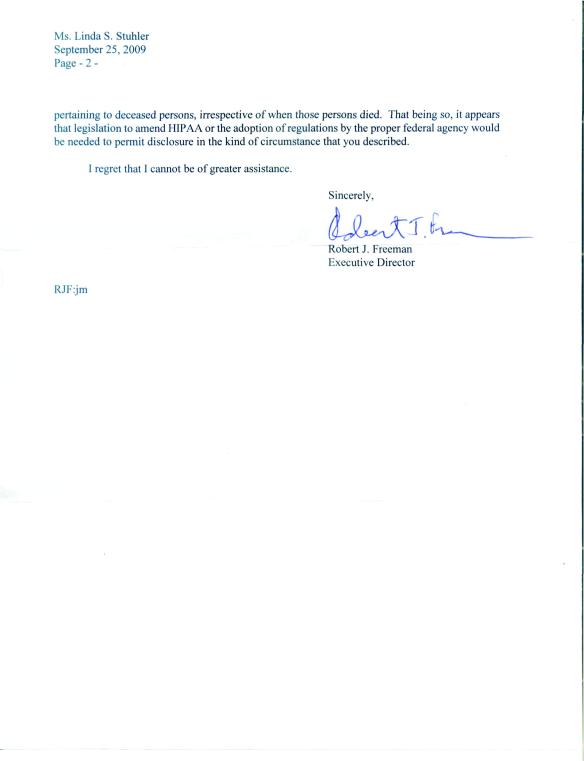 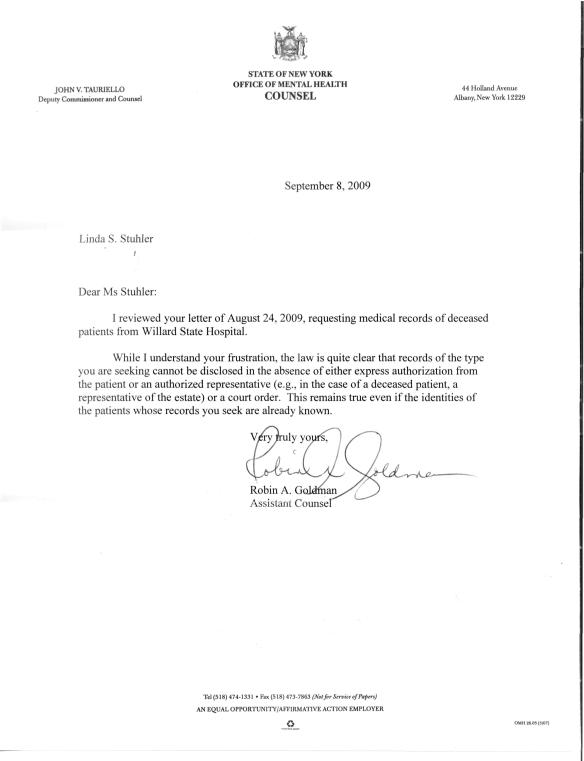 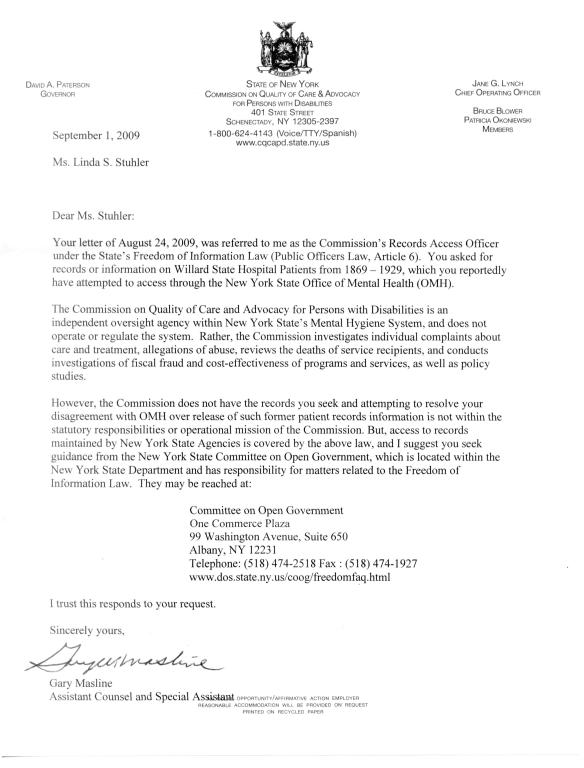