I need to explain who Samuel J. May was because he was mentioned in a previous post about Miss Phebe B. Davis who wrote the pamphlet, Two Years and Three Months in the New York State Lunatic Asylum at Utica: Together with the Outlines of Twenty Years’ Peregrinations in Syracuse. Miss Davis believed that “Priest May” had a hand in having her committed to the State Lunatic Asylum at Utica sometime between 1848 and 1853. Davis stated, “I have given simply the outlines of what took me to the Lunatic asylum. S. J. May, the great woman’s rights man of Syracuse, pretended that he thought it would be a great benefit to my health; yet he knew all the time that I could take care of myself, if I had any thing to do it with, – and that is more than his women-folks can do, though they are rational, I suppose – for they will not cook their own food after it is given them, while I was obliged to work for what little I did have and then do my own cooking besides. But however, as I could not make a comfortable living by sewing, I thought it best to go, and the more readily, as I had heard so much said in commendation of the institution and of the kind treatment the patients received there. Still, notwithstanding all these good hear-says, as soon as I thought of going there, a feeling of suspicion crept into my mind, which I could not eradicate and did not, that all was not right in that Asylum, and this impression proved to be too true – it was not imaginary, but real.”

Samuel May will also be mentioned in my next post in which Susan B. Anthony helps a mother, with her child, escape from an abusive husband who had her committed to an insane asylum for eighteen months. This story is taken from the book Eighty Years And More: Reminiscences 1815-1897, Chapter XIII, Reforms and Mobs, by Elizabeth Cady Stanton. 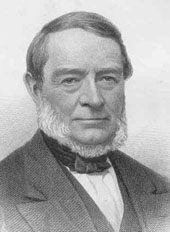 Samuel Joseph May was born in the Boston area of Massachusetts on September 12, 1797, to Colonel Joseph and Dorothy (née Sewell) May. In 1825, he married Lucretia Flagge Coffin and had five children. He was a minister and an influential reformer during the nineteenth century who advocated for women’s rights, better education for children, and the abolition of slavery. He died July 1, 1871, in Syracuse, New York. Abigail “Abba” Alcott (née May) was the sister of Samuel May. Abigail and Amos Bronson Alcott were the parents of Louisa May Alcott who was an American novelist best known as the author of the novel Little Women which was based on her childhood and home life.

According to the Dictionary of Unitarian & Universalist Biography website: “Samuel Joseph May (September 12, 1797 – July 1, 1871), a Unitarian minister, was one of the greatest social and educational reformers of the nineteenth century. He advocated and organized on behalf of freedom and civil rights for blacks, emancipation and voting rights for women, and just rights for workers. Because he was many decades ahead of mainstream acceptance of the policies he fought for, he was often at odds with his ministerial colleagues, church members, and the public at large.”

“In 1845 May began his longest ministry, at the Church of the Messiah in Syracuse, New York. There, he came to understand the plight of women as similar to that of blacks. In his seminal address, the Rights and Condition of Women, 1846, he asked why ‘half of the people have a right to govern the whole.’ He became a familiar figure in the women’s rights movement, speaking at conventions and accepting committee roles, working closely with Elizabeth Cady Stanton and Susan B. Anthony. ‘Humanity is dual, and yet when perfected it is one,’ said May at the 1850 Woman’s Rights Convention in Worcester, Massachusetts. ‘A perfect character in either man or woman is a compound of the virtues of each.’”

“On the eve of the Civil War the atmosphere in Syracuse became ever more incendiary. In January 1861, when a major antislavery rally was to be held, May and Susan B. Anthony were threatened with violence by an angry crowd that stormed the building. The rally was cancelled, and the mob paraded through the streets of Syracuse with effigies of May and Anthony, finally burning them in the center of town.”

“As war approached, May reluctantly recognized that human rights could no longer be pursued without violent means. He ended by supporting the war, urging the government to prosecute it quickly, and pressing Lincoln to free the slaves. During the war, May did charitable work on behalf of soldiers and prisoners. After the war he campaigned for the rights of workers and championed welfare for the poor, rights for women, and the redistribution of wealth through a graduated income tax. Into his last years he maintained his support of black and female suffrage.”
SOURCE: All material copyright Unitarian Universalist History and Heritage Society (UUHHS) 1999-2013 From the biography of  Samuel Joseph May, written by Dennis Landis, in the Dictionary of Unitarian and Universalist Biography, an on-line resource of the Unitarian Universalist History & Heritage Society. Dictionary of Unitarian & Universalist Biography, All material copyright Unitarian Universalist Historical Society (UUHS) 1999-2012.

Names of patients who were incarcerated at state insane asylums 72 years ago or more can be difficult to find; not because they aren’t there but because they are buried in old documents, records, and books. It is rare that one finds a first hand account of the experiences of a person who had lived to tell the story of being locked up at the state lunatic asylum. Miss Phebe B. Davis, wrote and published a pamphlet entitled TWO YEARS AND THREE MONTHS IN THE NEW-YORK STATE LUNATIC ASYLUM, AT UTICA: TOGETHER WITH THE OUTLINES OF TWENTY YEARS’ PEREGRINATIONS IN SYRACUSE, in 1855, with her own money. Her goal was to inform the public about the terrible abuses that were endured by the patients while in “the house.” I read her story with one hand over my mouth for many different reasons, and at times, I could be heard to say, “Oh, Jesus!” and “Oh my God!” 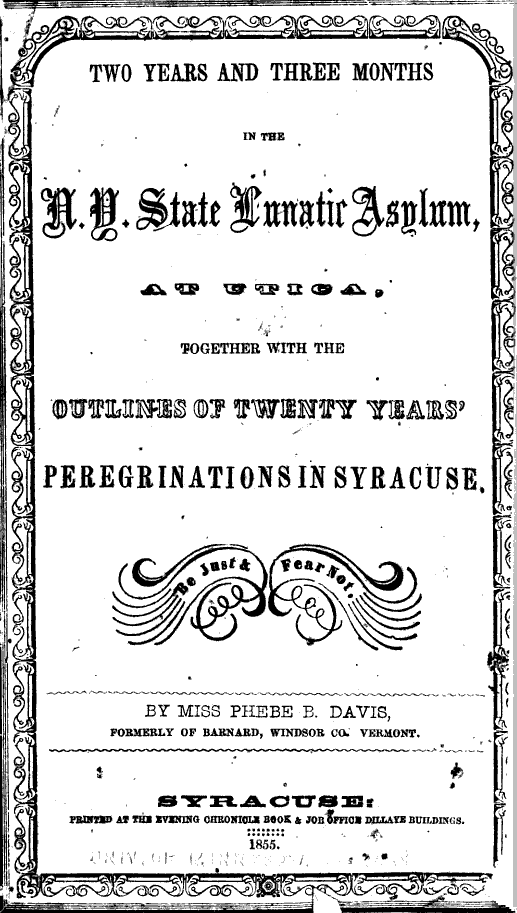 I have transcribed her pamphlet word for word and bolded the names of all the people she mentioned. This is what I meant in my book when I said: “To believe that all our ancestors were good, kind, law abiding citizens who were literate, owned their own homes, and held steady employment is unrealistic.” Some of our ancestors were down right mean!

The pamphlet is not an easy read since it was written 157 years ago, but all 64 pages are worth the effort. I knew that some words were printing errors but everything else I kept as originally written. If you have read my blog, you will already know Dr. Amariah Brigham and Dr. John P. Gray. In the coming days, I will do more research on Miss Davis, Dr. Benedict, Dr. Nichols, and Dr. Cook “Bub.”